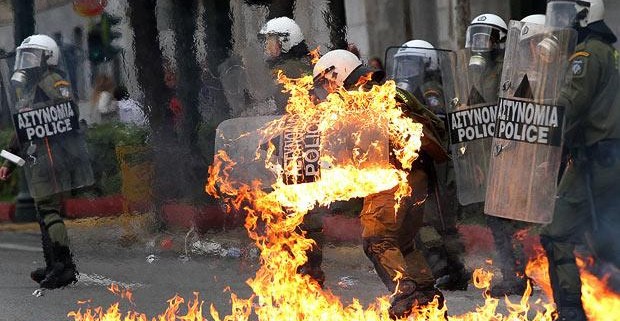 With Greece having defaulted on a 1.6-billion-euro bond payment which was due on June 30, the long-feared prospect of Hellenic financial chaos is just about here.

The nation’s banks remain closed, and the government imposed controls of the movement of capital in and out of the country. A Greek referendum is set for Sunday, in which voters will decide whether to accept more austerity or face the prospect of being booted from Europe’s currency union.

How bad is the problem?

Greece owes foreign creditors about 280 billion euros, including $242.8 billion to public or quasi-public entities, such as the International Monetary Fund, the European Commission and European Central Bank. It doesn’t have the cash to make the interest payment due this week, and the failure to make a deal to restructure and refinance the obligation raises the prospect of an imminent default. The two sides are talking about an 18-billion-euro package to refinance some of that debt.

Greece’s private creditors took a write-down of about 75 percent on debt owed to them in 2012, but the public entities have resisted a similar move.

Why have talks broken down?

The so-called Troika of the IMF, ECB and EC are looking for a combination of spending cuts (the most politically sensitive of which are to pensions that function as the Greek equivalent of Social Security) and tax increases. Greece’s top tax rate of 42 percent already applies to annual incomes as low as 42,000 euros. In addition, the nation has a value-added tax of as high as 23 percent, and Social Security taxes are also much higher than in the U.S. The country is already having huge problems collecting taxes it is owed. Greek Prime Minister Alexis Tsipras, pointing to the nation’s 25.6 percent unemployment rate, argues that Greece can’t handle more austerity.

Greece’s anti-austerity Syriza party called for a referendum, hoping voters would back its push to get creditors to back down. It also imposed so-called capital controls to halt the flight of money out of the country and closed banks for a week.

While most domestic transactions are little affected, there is a daily cash-withdrawal limit of 60 euros, and international transactions are subject to approval. Greek banks had been reporting a sharp decrease in deposit balances since at least April, cutting into the banks’ ability to meet their own international obligations. Europe has also been helping Greek banks with a program called Emergency Liquidity Assistance, but Goldman Sachs economist Huw Pill said Sunday that the assistance could end early this week as the rest of Europe tries to cap its total exposure to Greece.

How will the mess affect the markets in Europe and the U.S.?

[sociallocker] European markets traded sharply lower on Monday, and the Dow Jones Industrial Average opened nearly 1 percent lower in New York. But the effect may be short-lived: S&P Capital IQ published a 70-year historical analysis of past market shocks that found events like this produce an average decline of 2.4 percent on the next trading day, which has been recovered in an average of 14 trading days.

“Greece represents less than 2 percent of the EU’s GDP,” S&P strategist Sam Stovall wrote. “By itself, its default or exit won’t upend the EU. … Yet if this drachma drama triggers a market decline in excess of 10 percent, not seen since October 2011, it may be a blessing in disguise. As history has shown, prior market shocks have usually proven to be better opportunities to buy than bail, primarily because the events did not dramatically alter the course of global economic growth.” [/sociallocker]

What happens if Greece leaves the euro, or is forced to leave the euro?

Estimates of how little Greek drachmas may be worth are all over the place, from 340 to the U.S. dollar to as little as 1,000 drachmas to the dollar. Even before Greece is (or isn’t) forced to leave the currency union, there is talk of the government meeting its obligations in so-called “parallel currency,” whose value is highly uncertain.

Has the IMF’s austerity program worked so far?

No. Austerity has been the rule in Greece since the first debt-restructuring program was approved in 2010. But Greece’s unemployment rate has nearly tripled since, and annual gross domestic product has dropped 100 billion euros, or almost 30 percent. Greece’s slashed spending and tax hikes brought the nation’s “primary deficit,” or deficit before debt-service payments, into surplus territory in 2010. But the program was the equivalent of slamming on the economy’s brakes: Output dropped so rapidly that the primary deficit is now again 2 percent of Greek gross domestic product even with tough controls on spending. That’s not much different than the U.S., but the U.S deficit as a percentage of output is declining because the U.S. economy Is growing.

What does this mean for Greek tourism?

Uncertainty overshadows Greek tourism. And the stakes of not interrupting tourism are high indeed: Tourism accounts for 18 percent of the nation’s economy and employs a quarter of its workers, according to the Association of Greek Tourism Enterprises. Greece attracts as many as 17 million annual visitors, twice the nation’s population, and is virtually the only industry still growing in a nation where an estimated 59 businesses are closing each day.

But already, tourists are reporting difficulty getting cash, because automated teller machines are running out, and the threat of capital controls had some merchants unwilling to accept credit cards. Over time, leaving the euro and devaluing the drachma would lead to a period where Greek vacations should be very cheap for Western tourists.

How long that would last, and the impact it would have on hotels and other merchants, is hard to forecast. But resort owners are resisting creditor proposals to end or curtail their tax breaks for resorts on more remote islands and to raise the value-added tax on lodging.

Note: This post is an abstract from the original article which can be found here: http://www.cnbc.com/id/102795790