What is Short Selling?

Before talking about what a short squeeze or bear trap is, we first need to understand the concept of short selling a stock.

Normally, investors buy stocks when they expect prices to go up, so that as the stock prices increase, they can then sell the stocks they own at a higher price, and make a profit.

However, what if they expect the stock price to go down?

How then would they profit from this?

Besides using financial derivatives such as stock options or CFDs, one common method traders use is to borrow the stocks from someone (an investor who owns the stocks), and then sell those stocks in the market.

By selling stocks they do not own (the borrowed stocks), they will need to buy the stocks back to return the stocks to the person who lent it to them.

The idea is that when the time comes to buy back those stocks, the price of the stocks would have fallen, so it would be cheaper for them to buy it back.

Effectively, by “selling high” and then “buying low”, they are able to profit from the difference.

Of course, there are risks involved, like if the stock prices goes up instead going down, then they would be forced to cover (buy back) those borrowed shares at a higher price.

And if a short squeeze happens, they could potentially lose a lot of money.

When you buy a stock, the price cannot go below zero, so the maximum you can lose is your investment.

But with a short position, there is no limit to how high the stock can continue climbing, which means the losses can snowball to more than your original investment, hence the short squeeze (bear trap). 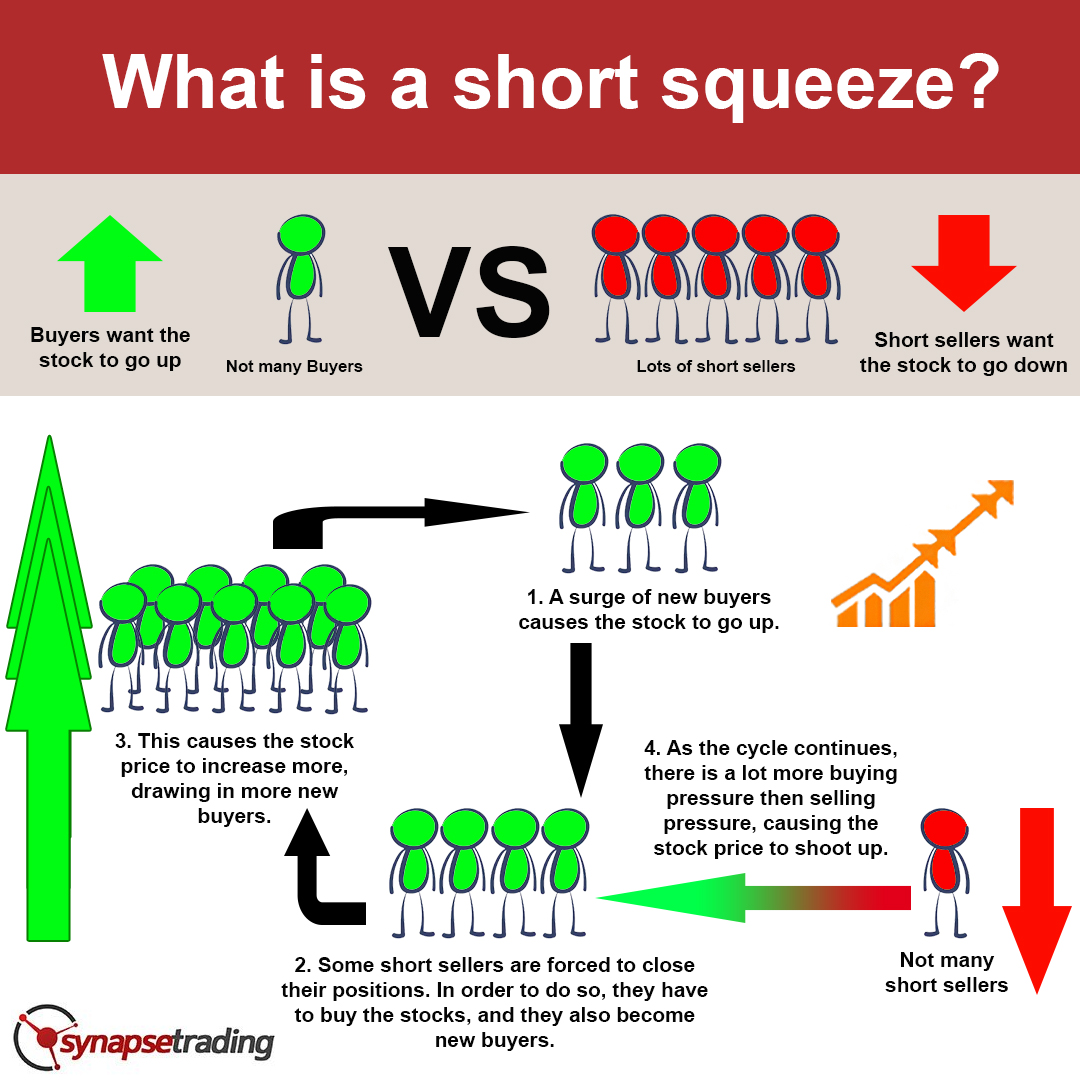 What is Short Interest?

Now that we understand the concept of short selling, how do we know which stocks are being heavily shorted? (And have potential for a short squeeze?)

We can look at this statistic called the short interest, which shows the quantity of shares outstanding that are currently sold short, which means the short sellers will need to buy these stocks back at some point of time, or if there is a short squeeze (bear trap).

This number can either be expressed as the absolute number of shares that are currently short, or if it is expressed as a percentage, then it shows how many percent of the total outstanding shares are short.

For example, 5 million shares out of 100 million outstanding shares, or 5% if it is expressed as a percentage.

In general, the short interest gives you a benchmark of the market sentiment for this stock.

If there is a lot of short interest, it means people are generally bearish about this stock, so the fundamentals might be bad or hedge funds are heavily building short positions.

If the short interest reaches an extreme point, such as short interest percentage exceeding 50%, then it could signal that “everyone who has wanted to short has shorted”, and lead to a lack of new sellers.

This could also mean that the stock is ripe for a short squeeze, because if there are little new sellers, all it takes is for new buyers to come in to tips the scales and cause a snowball effect.

If you are looking for this data, stock exchanges usually report short interest monthly for the stocks they list. The NASDAQ publishes a short interest report in the middle and also at the end of every month. 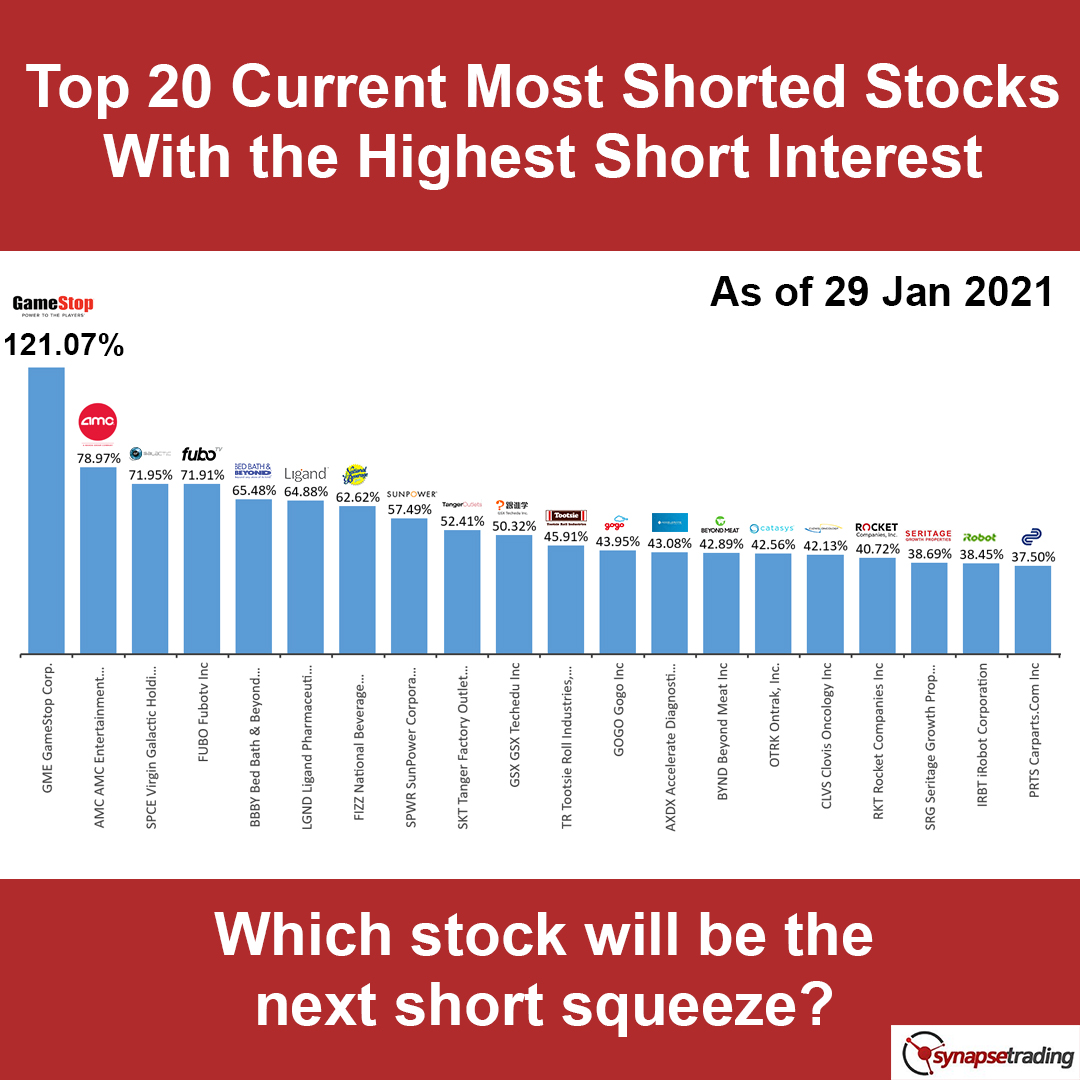 For example, these stocks with a very high short interest make them more susceptible to a short squeeze (bear trap), which was what happened when traders on r/wallstreetbets decided team up to push some stocks (Gamestop, AMC, etc) up, triggering a short squeeze on them.

What is a Short Squeeze (Bear Trap)?

A short squeeze happens when a stock jumps sharply, forcing short sellers to buy it in order to prevent even greater losses. Their scramble only adds to the upward pressure on the stock’s price.

A bear trap is a false technical bearish signal for price to continue falling in a down swing on a chart to new lower prices that lures in short sellers. Bear traps catch short sellers chasing a price lower which reverses causing shorts to cover and leads to more buying and momentum to the upside.

A bear trap usually starts with price moving lower sharply and creates expectations of a continued downtrend on the chart. Instead, the price of the chart can go sideways in a range and eventually rally higher causing short sellers to be trapped on the wrong side of the move and to incur losses.

Bear traps are usually short squeezes, when a big rally to the upside happens during a downtrend in a market due to a lack of sellers at lower prices. This combines with the need for short sellers to buy to cover due to the reversal in the market trend creating heat on their positions.

Short squeezes gain momentum as more short sellers are forced to buy to cover their positions at higher prices resulting in increased trading volume on the reversal. The pressure on the short sellers to buy back their positions can be amplified by margin calls, trailing stops, and stop losses being triggered on their trades. The short sellers create buying pressure because they have to buy back the shares or contracts they are short to cover during the swing higher in price. Most short squeezes that are bear traps result in very fast and powerful moves to the upside.

A bear trap is more likely to happen in stocks with large amounts of shares outstanding as short interest and a high short interest ratio. Bear traps have a higher probability to happen when a large amount of a stock’s float is short, a market has an extremely bearish sentiment, or sellers simply are exhausted after a long downtrend and the chart finds price levels of support with no sellers left.

When a market reaches maximum bearish sentiment at a price level where traders and investors prefer to hold their positions instead of sell a bear trap could be set.

As we mentioned earlier, a high short interest will provide the fuel for a short squeeze, but to ignite the flames, we need a trigger, or a catalyst.

This can be a fundamental catalyst like a management change, or a launch of a new product, an expansion, etc, or it could be a technical catalyst like price hitting a key price support level or breaking a new 52-week high, etc.

Either way, the gains triggered by the catalyst need to be significant enough so that the short sellers will panic and race to cover their short positions. Depending on the history of the stock and its volatility, this “critical mass” gain can be as small as 1-2%, or can go up to 5-10% for more volatile stocks.

One way to find fundamental catalysts is to browse newspaper or online sources for press releases, or scheduled events. These could be things like a new product launch, a product safety test report, a transition of management, etc.

The key thing is to look for events that can potentially move the stock price significantly in a short period of time, especially if based on your research, the outcome could turn out very different from what everyone else is expecting.

In short, we are looking for a potential large deviation from the consensus expectations.

Trading a short squeeze or bear trap is not a simple set-it-and-forget-it strategy. This is because short squeezes happen fast.

A short squeeze doesn’t take place over the course of months or years. Most happen over just a couple of days, so if you want to trade the short squeeze, you need to act fast once you see the opportunity, or you could miss the whole event entirely.

There might be small pullbacks from profit-taking along the way, and eventually as most of the short sellers are squeezed out, the fuel for the movement runs out, and the momentum will start to fizzle. This is the point where you want to get out as fast as possible before the party ends.

Though trading short squeezes or bear traps can be very profitable, they are also some downsides:

Ultimately, you will need to do a lot of research to find these rare opportunities, but if you get good at it, a handful of such trades a year is all you need to make decent returns. 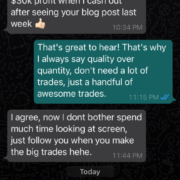