Many new to trading have the tendency to liquidate positions that show a small profit, yet they keep those positions that show a loss as are unwilling to take a loss, in hope that prices will rebound. Such a counter-intuitive strategy will result in small wins and large losses, but why do people still do it? The new science of behavioral finance psychology may offer an explanation.

Investors are less willing to recognize losses (which they would be forced to do if they sold assets which had fallen in value), but are more willing to recognize gains. This can be explained by the value function curve, where investors turn more risk-seeking as the stock depreciates. As shown by studies on ex-post returns, it would be more profitable to cut losses fast and let profits run. Hence, investors should treat unrealized losses as a sunk cost, and focus on reducing prospective costs (likelihood of more losses). Unfortunately, irrational hope destroys any edge their analysis provides, thus resulting in an unfair gamble.

With its roots from prospect theory, this refers to investors’ tendency to strongly prefer avoiding losses to acquiring gains. For loss aversion, investors prefer an uncertain gamble to a certain loss as long as the gamble has the possibility of no loss, even though the expected value of the uncertain loss is lower than the certain loss. For the breakeven effect, investors prefer a gamble that offers the potential of recovering to finish at an aspiration level rather than a certain rate of return.

Some studies suggest that losses are twice as powerful, psychologically, as gains. Hence, investors will cling to the hope (including rationalization) that prices will rebound to their entry price, which they have now established as a reference point. However, this reference point is illogical, since their entry point does not affect the future direction of prices. One question to ask is, “if you don’t have a position now, would you open a new position?”

If prices fall past their stoploss (showing that their analysis was wrong), it means that the odds are now against them. If prices fall but do not hit their stop, and subsequently rises back to breakeven, it actually shows that their initial analysis is still correct (not proven wrong), which means that exiting at breakeven is in fact destroying their winning trades. This will lower their hitrate by causing them to exit winners prematurely.

How can traders overcome these biases?

Traders should keep mind that trading with an edge will increase their wealth over time, but it is not possible to be right on every trade. The number of times you win or lose doesn’t matter. It is how much you lose when you are wrong and how much you win when you are right that matters. One should also separate decision-making from execution, meaning to “plan the trade” and “trade the plan.” A good way to manage risk is to use a stoploss to limit one’s downside, and pick trades with good R/R (reward:risk ratios) so that one’s winners will be more than their losers. This will allow one to cut their losses fast, and let their winners run. 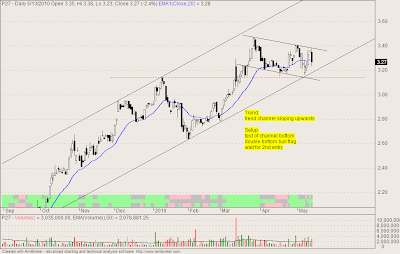